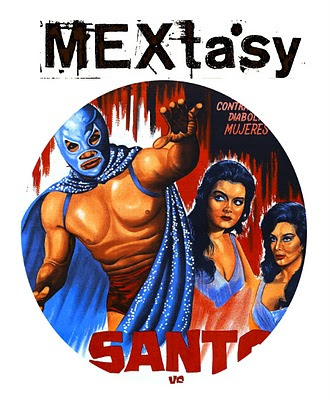 "Mextasy: Seductive Hallucinations of Latina/o Mannequins Prowling the American Unconscious" is an art show opening Fall 2010 at the Art Gallery @ South Texas College's Pecan Campus in McAllen, Texas--the show will be up from September 30th through November 12, 2010. There will be a lecture and book signing (free cartoon inscriptions, no less!) by William Nericcio and Guillermo Nericcio García @ 2:30pm, September 29, 2010 at the Mid-Valley Campus, Weslaco; and at 1pm, Thursday September 30, 2010 at the Pecan Campus Art Gallery in McAllen. There will also be a reception from 6 to 8pm on Thursday night at the Pecan Art Gallery.

These events are FREE/GRATIS. Click the image above for an image-laced summary.

If you love outrageous Mexican, Mexican-American and Chicana/o art, this is the show for you! Imagine El Chavo del Ocho fused with Andy Warhol and you get a feel for the groove of the show. 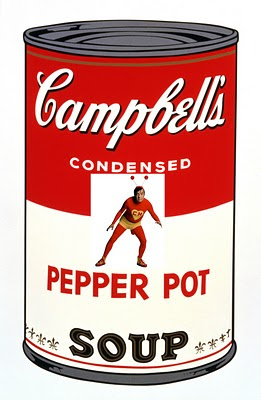 Curated by Rachael Freyman Brown, with the assistance of Amanda Alejos, with the meddling of the artist, Guillermo Nericcio García, the show promises to reflect and expand upon William Nericcio's 2007 book with UT Press, Tex[t]-Mex: Seductive Hallucinations of the Mexican in America.


In addition to racist artifacts from American mass culture (the bread and butter of Uncle Sam's unconscious), the show also features works that are "xicanosmotic," that is, works by Mexican-American artists where the delicious tattoo of the Mexican/US frontera is writ large as with Perry Vasquez, Izel Vargas, Marisela Norte, and Kenny Sanchez. More to come! 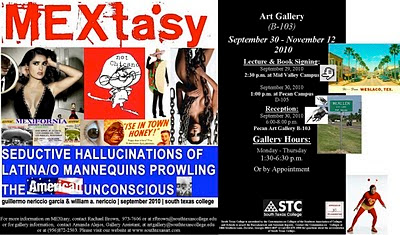 Posted by Memo Nericcio at 9:17 PM