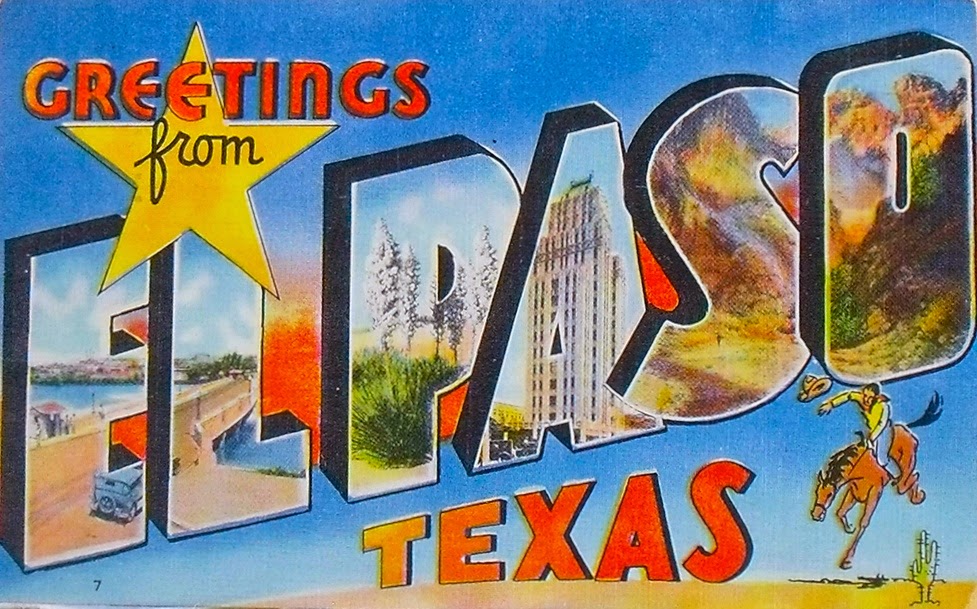 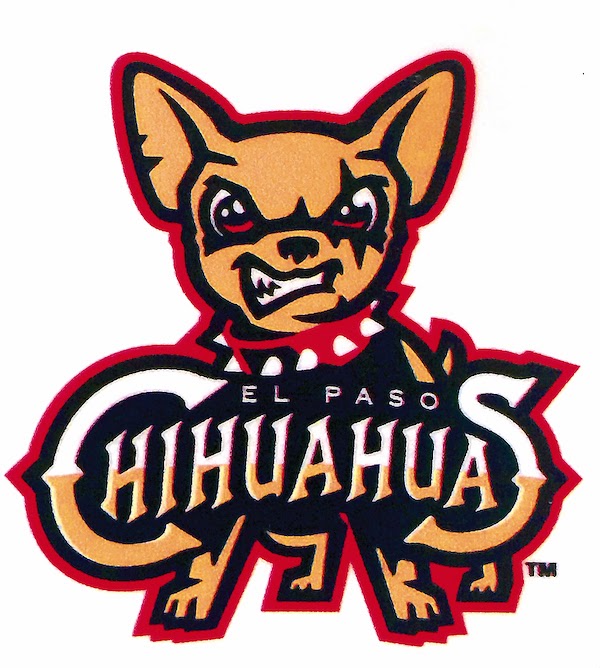 Born and raised in the dusty, hot (then unpaved, thanks J.C. Martin) streets of Laredo, I have never really ventured to that other grand bordertown up the Rio Grande, El Paso, Texas! But that fault is remedied the third week of October with the traveling Mextasy roadshow venturing to UTEP--the University of Texas at El Paso. I will be the guest of the students and faculties of the departments of Communication and Chicana/o Studies there!  The main talk is at 5:30pm in Quinn Hall #212--it's free and open to the public. What to expect? Desmadres, readings, screenings, signings, hawking of posters, and some snippets from my new book Eyegiene!
new event poster: click to make mucho mas grande! 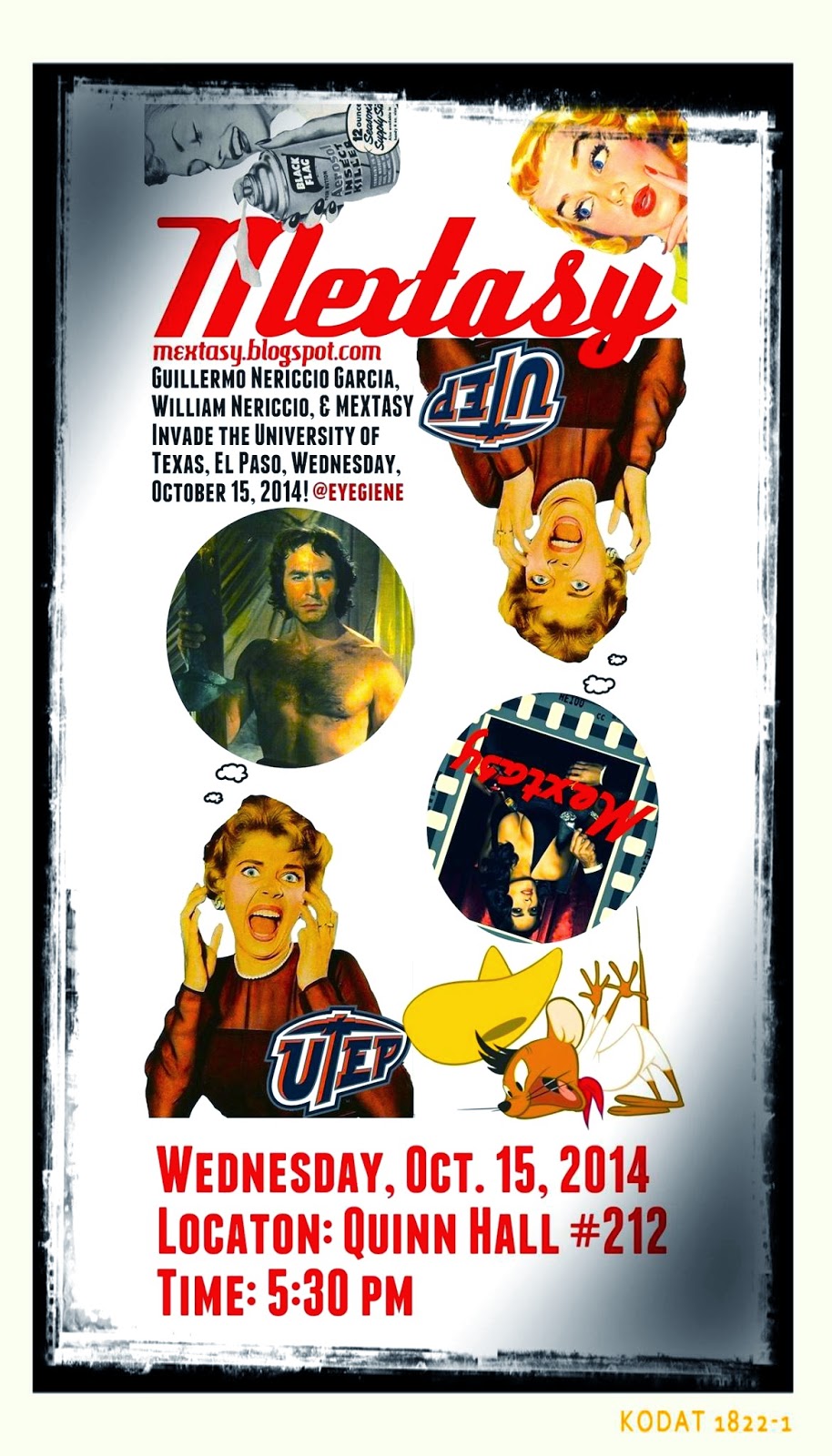 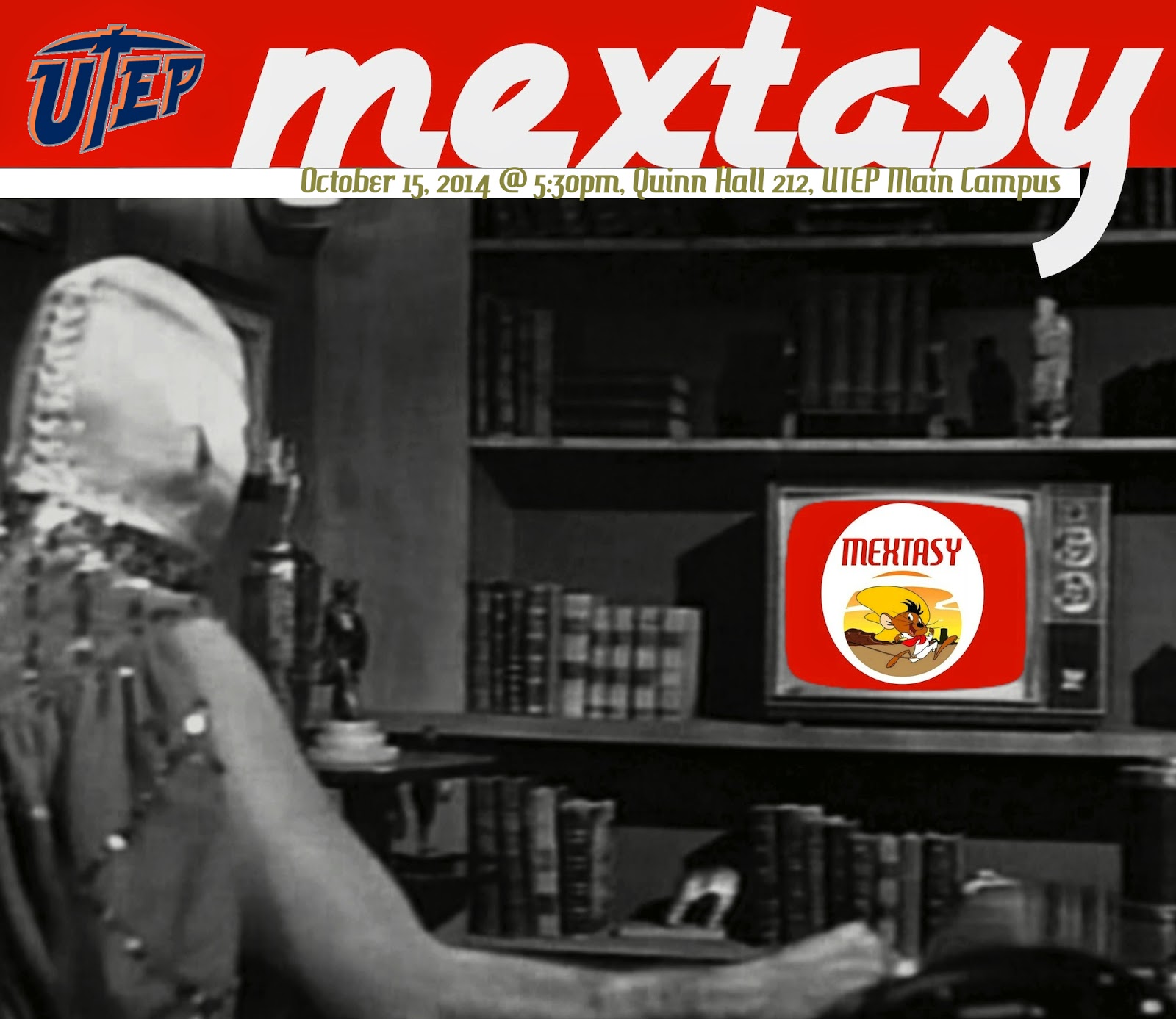 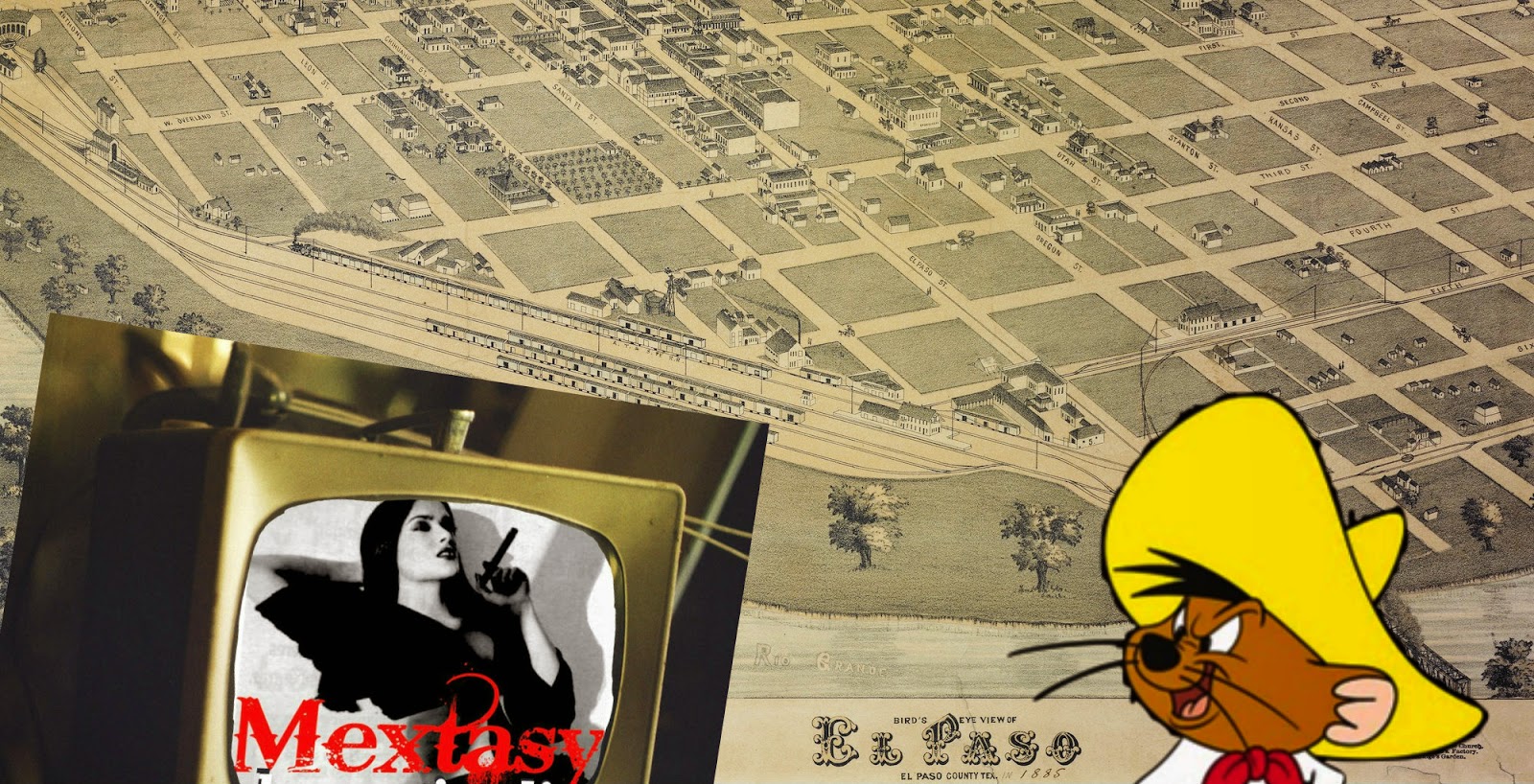 Posted by Memo Nericcio at 6:10 AM No comments:

MALAS, the Master of Arts in Liberal Arts and Sciences Collaborates with the English Department at San Ysidro High: MEXTASY: “Visiting-Professor-for-the-Day”/ “The Past, Present, and Future of Mexican, Mexican-American, and Latino/a Literature, Film, Photography, and Art on the Border and Beyond” 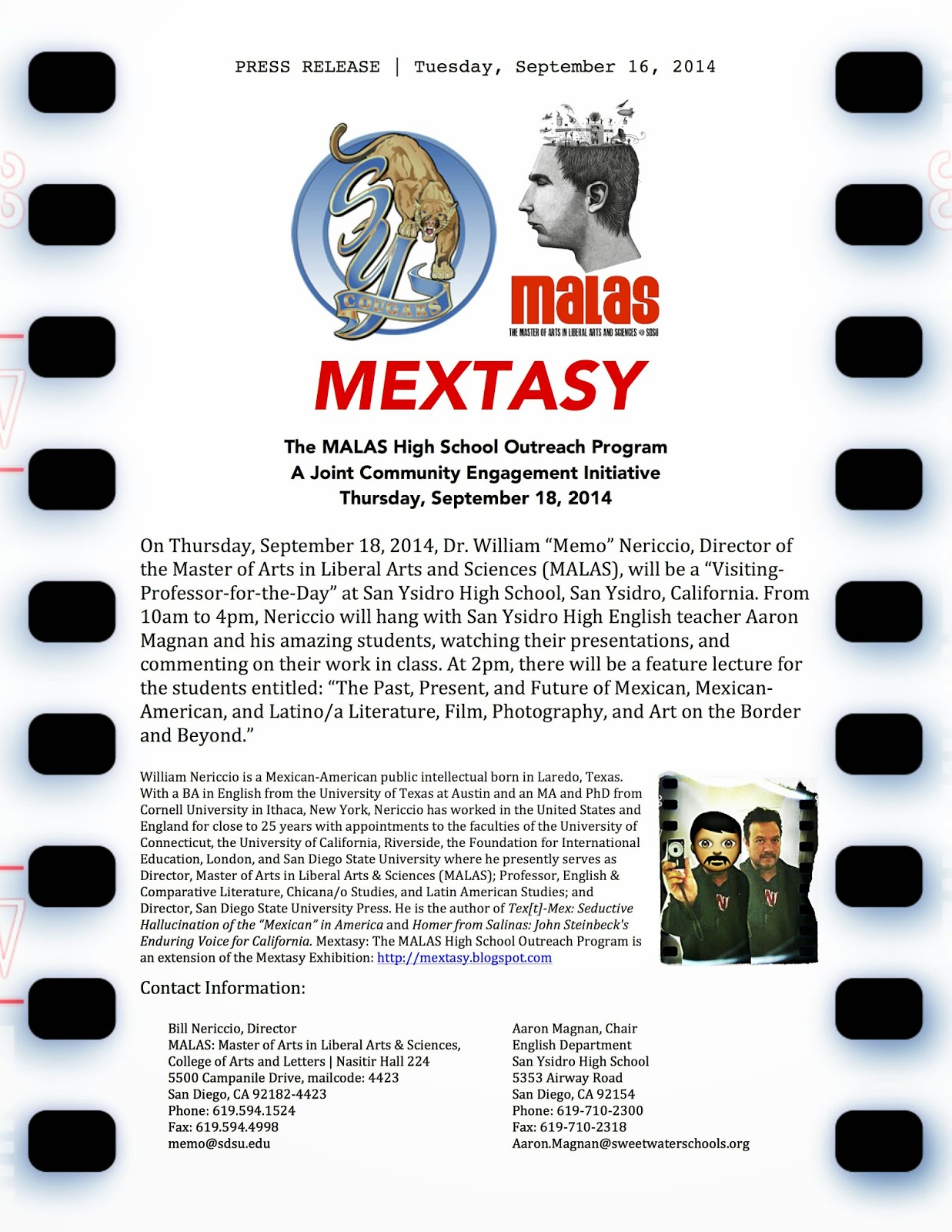 On Thursday, September 18, 2014, Dr. William “Memo” Nericcio, Director of the Master of Arts in Liberal Arts and Sciences (MALAS), will be a “Visiting-Professor-for-the-Day” at San Ysidro High School, San Ysidro, California. From 10am to 4pm, Nericcio will hang with San Ysidro High English teacher Aaron Magnan and his amazing students, watching their presentations, and commenting on their work in class. At 2pm, there will be a feature lecture for the students entitled: “The Past, Present, and Future of Mexican, Mexican-American, and Latino/a Literature, Film, Photography, and Art on the Border and Beyond.” 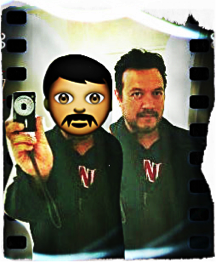 William Nericcio is a Mexican-American public intellectual born in Laredo, Texas. With a BA in English from the University of Texas at Austin and an MA and PhD from Cornell University in Ithaca, New York, Nericcio has worked in the United States and England for close to 25 years with appointments to the faculties of the University of Connecticut, the University of California, Riverside, the Foundation for International Education, London, and San Diego State University where he presently serves as Director, Master of Arts in Liberal Arts & Sciences (MALAS); Professor, English & Comparative Literature, Chicana/o Studies, and Latin American Studies; and Director, San Diego State University Press. He is the author of Tex[t]-Mex: Seductive Hallucination of the “Mexican” in America and Homer from Salinas: John Steinbeck's Enduring Voice for California. Mextasy: The MALAS High School Outreach Program is an extension of the Mextasy Exhibition: http://mextasy.blogspot.com