A brief multimedia presentation examining dominant trends in the representation of Latinas and Latinos in American popular culture--from Hollywood to Madison Avenue, specific and damaging visions of Latina/o subjectivity have infected the synapses of Canadians, Americans, and Mexicans alike--these "ethnic mannequins" (Speedy Gonzales, Charo, the Frito Bandito, etc) some to dominate consciousness, leading to the renaissance on racialized hatred currently en vogue in the U.S. from New York to California, from Arizona to Georgia. If Lou Dobbs says that Mexicans are "diseased" and John McCain contends (with a straight) face the illegal immigrants are starting forest fires, and Rush Limbaugh tells his listeners to tell "Mexicans" to go back to their country, what is the result? Research would seem to suggest these collective efforts have led to a resurgence of anti-Latino hate and hate crimes at the very moment demographically that the lands of Uncle Sam are more decidedly Latino/a. The presentation will feature excerpts from Tex[t]-Mex, Eyegiene, the Tex[t]-Mex Galleryblog and art from Mextasy.


another poster version, that does not steal
from the one and only robert frank appears next 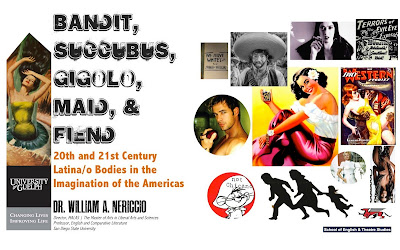 The day after the Guelph gig, I am lecturing at the University of Western Ontario--a draft of the poster here follows... 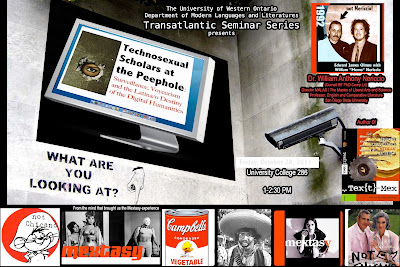 Posted by Memo Nericcio at 9:54 PM